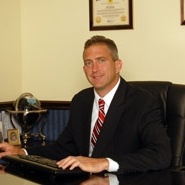 Robert Hannam has been helping clients work toward their financial goals for more than 25 years. Recognized for his dedication to his client’s best interest, he continuously tracks financial trends and educates his clients on the services and strategies appropriately tailored to their needs.

Robert earned his bachelor’s degree in financial services from Monmouth College in 1988. He began his career with Merrill lynch in 1989. He currently holds his FINRA series 7 and 63 securities registrations through LPL Financial. He also holds his Life and Health insurance licenses. Finally, Robert holds the CRPC (Chartered Retirement Planning Counselor) designation which is conferred by College For Financial Planning.

After spending the first 20 years of his career at three of the largest banks and brokerage firms in the country, Robert became frustrated with the corporations desire to do what was in their best interest first. He realized the only way to truly do what was in the client’s best interest was to become an independent advisor. So in 2009 through LPL Financial, Rob joined his long time friend and colleague Chad White at Safe Harbor Wealth Management. This move allowed him to offer objective investment advice and remain true to his core values of integrity, honesty and stays committed to acting in the client’s best interest.

Rob also has been a featured speaker on several local radio programs.

He has lived in New Jersey his whole life and currently resides in Brick, New Jersey. He has been married to the same wonderful woman for 30 years and has three great kids. He enjoys spending time with friends and family and is involved in coaching youth basketball.